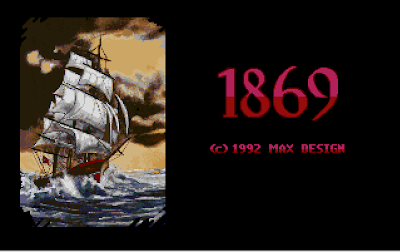 1869 is a simple (but not primitive) video game for Amiga and DOS-PC in which you play the role of the owner of sea trading company, during the golden age of clipper ships (half of XIX-th century). It has nice Amiga like colorful graphics and sounds. It is loosely connected with history – some historical events may affect the ingame situation.

The game is available on abandonware sites and runs perfectly under DOSBox.

Main screen of the game is the map of the world (we see parts of it in magnifying view, and in the lower part of the screen we have a small map to scroll the view to other parts). In upper right corner there is a date counter –clicking on it makes certain amount of time to pass (it depends on events in the game – it might be e.g. 4 days if we are waiting for the ship to be repaired or e.g. 3 weeks if we wait for a ship to reach a remote port). 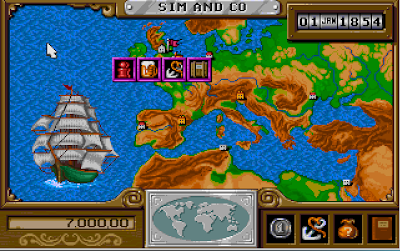 On the left side of the map, we see the picture of a ship – if we will click on its sails, we will see list of our ships, which will let us know their condition and order them to move. If we right-clik on it, we can check ships’ condition, load of goods and money and crews’ skills and morale. 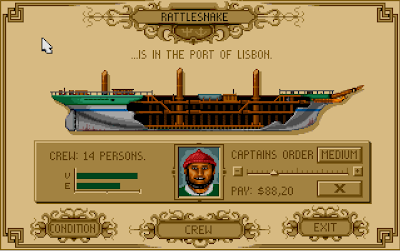 Ports are marked by small single buildings (their shape depends on the region). Clicking on the port displays basic information – state which port belongs to, main export good and political situation (that can be stable, unrest, revolts or war). Ports that are at unrest or revolted make a risk of being robbed of money or goods after arrival. Also our warehouse there can be burned. Ports at war are blockaded by the navy – going there in vast majority of cases ends up with a ship going down to 20% condition, all goods and money confiscated and crew got angry.

Clicking on the port in which our ship anchors or in which we have HQ or warehouse, moves us to merchant’s office, that is probably most important place in the game. There we sell and buy goods. 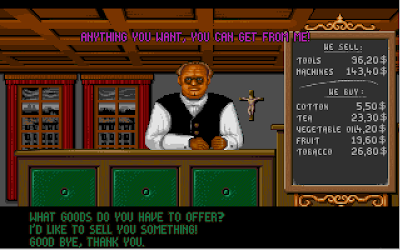 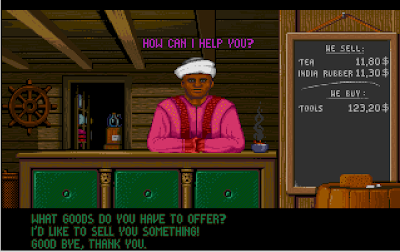 Also, at the desk of the merchant, we can sometimes see 2 types of advertisements (clicking on them moves us to an officer, who will present us their content) – the one with a painting of a ship is an offer of transporting passengers, one brownish is an information about urgently needed good in one of the ports, that can be extra paid. 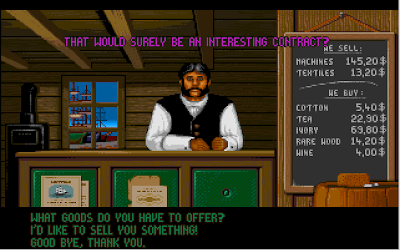 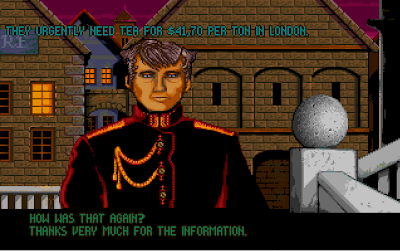 Right-click on the port we are present in always displays two icons – red “I” letter that shows basic information about the port and beer mug, that moves us to tavern. There we can hire a crew (we can choose out of many categories of seamen – according to their skills and demanded salary). We can also transfer money between the ships and buy tips about desired goods in other ports. Last but not least – we can ask for opening warehouse there. Price of opening the warehouse varies depending on a port – e.g. in small ports outside of Europe it costs 400$ and e.g. in Liverpool 1400$. 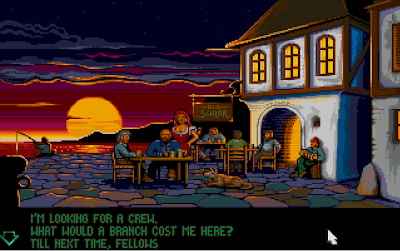 In some ports there is also an anchor icon, that takes us to the shipyard. There we can order to build a new ship, buy or sell used one, or to repair it. Only 5 shipyards can build ships – those are 5 shipyards of starting ports. In some other ports there are shipyards that can only repair ships (still, it might be a reasonable help). 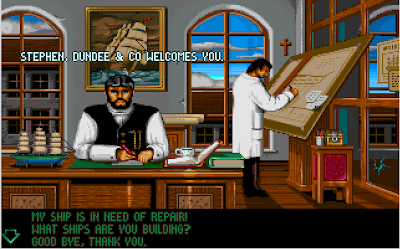 If we have a warehouse in port, we will also see an icon of a crate, that will take us there. In the warehouse we can store goods or money.

One warehouse plays the role of HQ of our company and it is located in our starting port since the beginning. Important issue about it – the annual tax is subtracted from cashbox of this warehouse. We have to remember to leave there appropriate amount of money– otherwise, on the day of payment, we will loose the game. 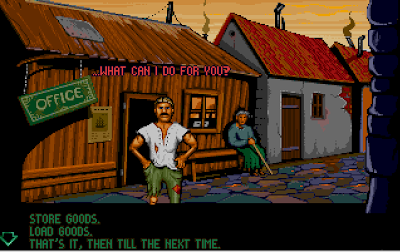 In lower right part of the screen we will see a few other icons – coin moves us to a bank, when we can take and repay the loans. Anchor is only flavor element and it will bring us to the hall of fame, where fastest routes’ crossings are recorded (we can find ourselves there later in game). Sack will move us to our company’s registers (financial, statistical) – most important thing is an amount of tax shown, that have to be paid at the end of the year. Copybook will take us to game options (save/load/restart/quit).

The goal of the game is simple – to earn, or it can also be said, to survive. We have to buy goods and transport them to the ports, where they can be sold for more. Most of ports sell 1 or 2 goods and buy up to 6 goods. Often, merchants are offering special price for some quantities of a good – for the rest of it they pay catalogue price.

Ordinary trading takes time to get richer – the profit is lowered by expenses of repairs and crew payment. However, there are special trade possibilities, that can give us instant and considerable income, although they are very risky. We can see those offers on above mentioned brownish ads in merchant’s office – those are mainly bringing weapons to ports at war and bringing tea to London (but not the only ones - once I've met an officer in Los Angeles, and he paid me for wool).

First option is extremely risky – to get to the port at war we have to pass blockade of the navy. If we will somehow manage to do it (that happens rarely) we will be greeted by the officer, who will pay us great price for the arms load.

Second option is less risky – we can buy tea in ports of India and transport them to London, where the same officer will pay us plenty for the load. The problem is that tea is a vulnerable good and can rot, if the cruise lasts to long (like some other goods, such as cotton or India rubber). Therefore we need fast ship and a good crew to use this option.

1. At start buy the cheapest ship. The second one will be yet too expensive in use.

2. It is good to find trading route that consist of more than two ports, and with a probability of getting special prices on the way. E.g.: London (machines) – Luanda (rare wood) – Odessa (coal) – Le Havre (wine) – Liverpool.

3. While having cheap ship (meaning slow one) avoid long routes – vulnerable goods may rot and expenses for crew’s salary will reduce your profit. Also storm can additionally damage your vessel. Better stay in the Atlantic Ocean.

4. Never forget to leave some money in your HQ – to be ready for the tax at the end of each year.

5. Remember that some goods (tea, cotton, tobacco, vegetable oil) are seasonal. You won't get them at certain periods of year.

6. The game contain some hidden humor - e.g. try to click on the parrot sitting on the arm of the merchant in Cayenne.

7. There is a .txt file in the game's folder, that contains most of the dialogues and terms. Although it is a bit tricky to preserve a flexion, you can translate the game to your native language (if it's not English).